This past weekend, I visited sunny LA (ok fine, it rained half the time), and I had a lot of stuff to bring for my four day visit. In addition to my my regular clothes, I brought several nice shirts as well as a tuxedo, which I packed carefully in a real ‘suit-case’. When folded the suit doesn’t get all wrinkled, which is pretty sweet. 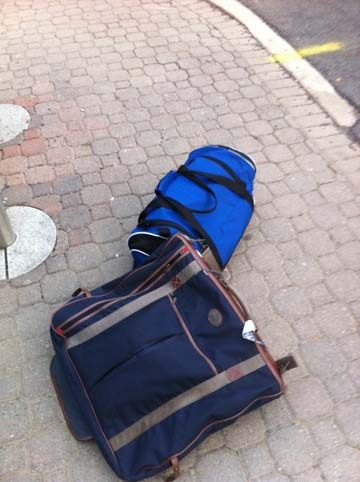 I flew Virgin America, which is an awesome airline that features live tv, outlets, and unlimited free drinks. The only downside is that they charge $25 for a checked bag.

Not cool, Virgin America. Not cool.

Of course, since I hate spending more money than I need to, I wanted to find a way around checking a bag. You see, there’s a big loophole that most people don’t think about. Most blindly follow the rules without thinking about other options.

Instead of checking my second bag, I wanted to simple have two large carry-ons. While it would be a pain to carry two big bags through the airport, it beats paying $25 for each bag.

But they’ll notice, right? The thing is, who will notice? It won’t be the person at the counter (also, by not checking a bad, you can print your boarding pass at home and save time not sitting in line!).

The TSA agents watching your stuff going through the screener couldn’t care less as long as it fits. They’re not affiliated with the airlines and have no reason to enforce their rules.

The only people who may notice are the flight attendants and even then, only if it doesn’t fit in the overhead bin. By then it will be too late for them to do anything about it.

Let’s pretend a flight attendant said something about it. At best, they could set it aside and put your bag beneath the plane, but they’d never charge you. I’ve flown a lot and seen lots of bags but below the plane, but I’ve never seen or heard of someone being charged for a bag once they got past the security checkpoint.

Readers, would you try this trick? Is this considered stealing something that you should have to pay for?

We use cookies on our website to give you the most relevant experience by remembering your preferences and repeat visits. By clicking “Accept”, you consent to the use of ALL the cookies.
Opt Out.
Cookie SettingsAccept
Manage consent

This website uses cookies to improve your experience while you navigate through the website. Out of these, the cookies that are categorized as necessary are stored on your browser as they are essential for the working of basic functionalities of the website. We also use third-party cookies that help us analyze and understand how you use this website. These cookies will be stored in your browser only with your consent. You also have the option to opt-out of these cookies. But opting out of some of these cookies may affect your browsing experience.
Necessary Always Enabled
Necessary cookies are absolutely essential for the website to function properly. These cookies ensure basic functionalities and security features of the website, anonymously.
Functional
Functional cookies help to perform certain functionalities like sharing the content of the website on social media platforms, collect feedbacks, and other third-party features.
Performance
Performance cookies are used to understand and analyze the key performance indexes of the website which helps in delivering a better user experience for the visitors.
Analytics
Analytical cookies are used to understand how visitors interact with the website. These cookies help provide information on metrics the number of visitors, bounce rate, traffic source, etc.
Advertisement
Advertisement cookies are used to provide visitors with relevant ads and marketing campaigns. These cookies track visitors across websites and collect information to provide customized ads.
Others
Other uncategorized cookies are those that are being analyzed and have not been classified into a category as yet.
SAVE & ACCEPT
Go to mobile version
Tweet
Share
Share
Pin